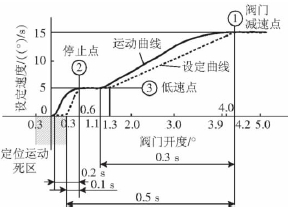 Â Â Â Â  To ensure that Q does not change, it is necessary to adjust Î± according to the curve of the curve in Figure 2. The study shows that the adjustment angle is generally around Â±2Â° . The traditional proportional valve has poor dynamic response. Even at low speeds of 5 ( Â° ) /s , dynamic adjustment of Â±2Â° is very difficult.
Â Â Â Â  ( 3 ) High requirements for control system
Â Â Â Â  The flow control valve has two operating speeds, high and low. At high speeds, the operating speed is not less than 15 ( Â° ) /s , and at low speeds is 5 ( Â° ) /s . If we assume that the update speed of the control system I/O interface board is fast enough and ignore the delay of encoder data transmission through the bus, etc., when the control accuracy needs to resolve an angle of no more than Â±0.2Â° , the scan cycle should be:
Â Â Â Â  TSâ‰¤ ( 0.2/15 ) Ã— 1000=13 ( ms ) at high speed
Â Â Â Â  TSâ‰¤ ( 0.2/5 ) Ã—1000=40 ( ms ) at low speed
Â Â Â Â  It can be seen that in order to ensure that the control system can distinguish the control accuracy of Â±0.2Â° , the minimum required system CPU scan cycle is no more than 40ms . If other factors are taken into consideration, the cycle time should generally not exceed 20ms . This puts forward certain configuration requirements for the blast furnace control system. When using different control systems, due to different system performance, the control effect of the flow control valve will have a certain impact.
Â Â Â Â  In order to overcome these shortcomings, China Metallurgy CCID Engineering Technology Co., Ltd. has developed a flow control valve control system based on hydraulic servo valve control.
3 Flow control valve control system based on servo valve
3.1 Servo valve characteristics
Â Â Â Â  Hydraulic servo valve has high dynamic response speed and high control precision. It has been widely used in the occasions where high precision and rapid response are required in the rolling control of the rolling mill. Figure 3 shows the response curves of the servo valve and proportional valve. 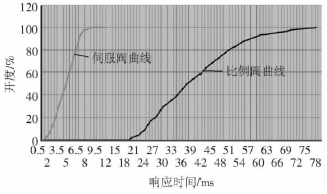 â—    The size can make to order according to the customer's demand.